Which Party Is Better for the Economy? – WalletHub Study 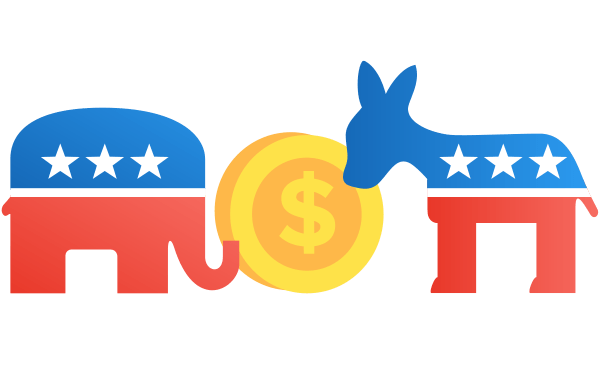 In the latest Gallup poll on the most important problems facing the U.S. today, the third highest share of respondents identified the “economy in general” as their biggest concern, while the highest share said “coronavirus/diseases,” the ultimate source of our current economic troubles and high unemployment rate. Asked which political party would best handle America’s problems, 40 percent of those who identified an issue chose the Republican Party, compared with 44 percent in favor of Democrats.

Such results beg the central question of this WalletHub report: Would Americans place their trust in the right party when it comes to dealing with the economy?

In order to objectively answer that question, WalletHub’s analysts compared the state of the economy under six different scenarios in which either Democrats or Republicans control one branch of government or both the presidency and legislature. We then examined each scenario according to 13 key indicators of economic performance, ranging from “real gross domestic product (GDP) growth” to “poverty rate” to the “consumer and mortgage debt per capita.” In addition, we analyzed each metric under the administration of each president who served between 1950 and 2019 to determine which president had the most positive impact on the economy. Continue reading below for our findings, additional expert commentary and a full description of our methodology.

For more insight, we relayed our findings to a panel of political-science, political-economy and macroeconomics experts and asked them to reflect on the results. Click on the panelists’ profiles to read their bios and thoughts on the following key questions:

Change in National Debt as a Percentage of GDP

Change in Annual National Debt as a % of GDP

In order to objectively answer the question “Which political party’s control is more suitable for national economic growth and stability?” WalletHub’s analysts compared the state of the economy during Democratic and Republican years spanning from 1950 to 2019 (except where otherwise noted):

Each period was evaluated according to 13 key indicators of economic performance, which are listed below. They range from “Real GDP Growth” to “Change in Annual National Debt as a Percentage of GDP.”

In order to facilitate comparison, we converted all dollar values to 2019 terms, with the exception of real GDP, which was calculated by the U.S. Bureau of Economic Analysis in “chained 2012 dollars” and annual gas prices, which were calculated by the Office of Energy Efficiency & Renewable Energy in “constant 2016 dollars”. In addition, S&P 500 annual growth was adjusted by each given year’s inflation rate.

Sources: Data used to create this report were collected from the Bureau of Economic Analysis, the Leonard N. Stern School of Business, the U.S. Bureau of Labor Statistics, the U.S. Census Bureau, Office of Energy Efficiency & Renewable Energy, Centers for Disease Control and Prevention, and Federal Reserve Bank of St. Louis.