2020's States with the Most & Least Powerful Voters 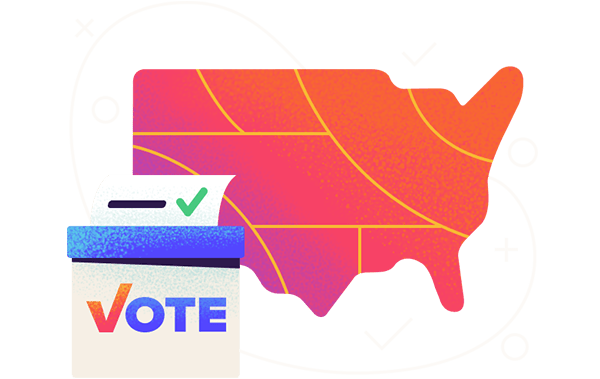 Not all votes are created equal. Some votes carry more weight than others simply because of the somewhat complicated way our voting system is organized. Members of Congress are elected by direct popular vote. But the president is chosen by the Electoral College, a group selected by voters when they cast a ballot for commander-in-chief.

In a presidential election, voter power varies widely by state. While all votes are theoretically counted equally — one person, one vote — the choices of swing-state citizens are more influential. It’s safe to assume that Alabama will vote Republican and California will vote Democratic in the upcoming election. In contrast, the electoral results of swing states such as Florida, Pennsylvania, Ohio and Michigan are up in the air, giving their voters more impact.

The same principle applies to voter power in the Senate. For example, it’s extremely likely that a Republican senator from Kentucky and a Democratic senator from Delaware will both be re-elected. But voters’ choices for senators in swing states hold much more power because they determine which political party controls the Senate.

So which states will decide the outcome of the upcoming election? As American voters head to the polls on Nov. 3 to elect the next leader of the free world as well as new senators in certain states, WalletHub compared the relative influence of voters in both the presidential and Senate races. In order to make such a comparison, we calculated a Voter Power Score for each state and for each type of election. Continue reading below for our findings, additional election commentary and a full description of our methodology.

Presidential Election - States with the Most & Least Powerful Voters (No. 1 = Most Powerful)

Note: Maine and Nebraska are the only two states that allocate votes proportionally (based on the congressional district allocation approach), but the outcome of the last elections has been similar to the one of a winner-take-all state.

Senate Elections - States with the Most & Least Powerful Voters (No. 1 = Most Powerful)

Time and again, the American voting system has been a target of criticism both domestically and overseas. In order to expand the discussion, we asked a panel of experts to weigh in on the problems with the current U.S. voting structures and procedures. Click on the experts’ profiles to read their bios and responses to the following key questions:

In order to determine the states with the most and least influential voters, WalletHub calculated the Voter Power Scores for both presidential and Senate elections in each state.

For presidential elections, we used the “win probabilities” calculated by fivethirtyeight.com and graded each state election on a 100-point scale, with 100 points being awarded to the states with literally a 50 percent chance of swinging either Red or Blue (50-50) and 0 points to the states with zero chance of one party determining the election (100-0).

We then multiplied the win probability score by the number of electors of a given state and divided the product by the state’s population aged 18 and older. Finally, we multiplied the result by 1,000,000 in order to calculate the Presidential Election Voter Power Score for that state.

We applied the same approach to calculate the Senate Election Voter Power Score for each state. In this case, however, we multiplied the win probability score by the number of Senate seats up for election in 2020 for a given state instead of its number of electors.

Our calculations are expressed in the following formulas:

Sources: Data used to create these rankings is courtesy of the U.S. Census Bureau, fivethirtyeight.com and archives.gov.

I have a CA ballot and a NE ballot, if I am voting primarily blue, which state will my vote make more of a difference in?