The CARD Act: What It Is, New Rules & More 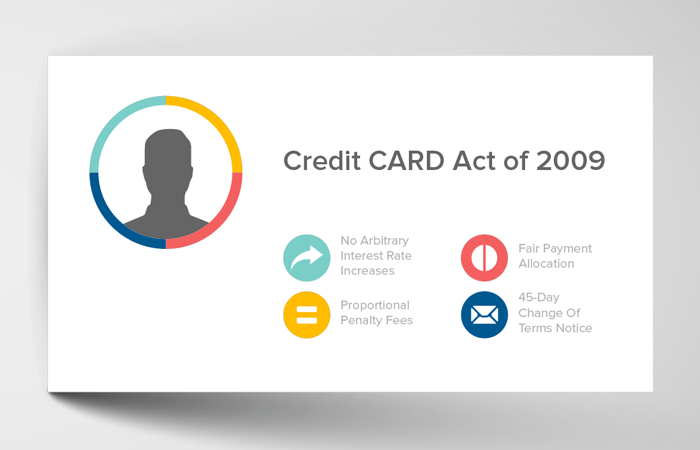 The credit card market once resembled the Wild West. Not only were banks basically allowed to advertise one thing and charge another, but a host of other predatory policies designed to maximize profits regardless of the negative impact on cardholders were all too common as well. Then came the CARD Act.

While controversial at the time of its passage in May 2009, the CARD Act quickly gained esteem after its February 2010 enactment.  In short, the law overhauled consumer rights in the credit card space and implemented a new code of conduct for issuers, particularly in terms of their account communications, fees, and rate changes. Credit cards weren’t the only plastic affected by the new law, however, as it also made gift cards more user-friendly by extending expiration dates and cracking down on fees.

But it’s impossible to do justice to such an important and complex law unless we analyze each component individually.

Credit Cards Before the CARD Act

As mentioned above, the CARD Act radically changed the credit card market by prohibiting a number of unfair industry practices and making credit cards altogether more consumer friendly.  Some of the most unfair policies that were all-too-common in the pre-CARD Act environment include:

The CARD Act is a lengthy, detailed piece of legislation, but the major changes that it brought to the credit card market can be broken down into six general categories which will be discussed in detail below.

Many people mistakenly believe the CARD Act prohibits the use of a credit card by anyone under the age of 21.  What the law really does, however, is require credit card companies to evaluate an applicant’s ability to pay prior to granting them a new line of credit.

In general, a credit card applicant must have reasonable access to the income or assets necessary to meet a credit card’s monthly minimum payment in light of their existing debt obligations and other monthly expenses.  The minimum payment on a student credit card is usually around $15.  The rule applies to people of all ages, although you still have to be at least 18 years of age to get your own credit card account.

Interestingly, credit card companies actually tend to offer above-average credit cards to college students, despite their unproven money management skills and impetuous nature.  While cynics believe that credit card companies are simply offering students a pot of gold in order to take advantage of them when they’re most vulnerable, creditors actually have an eye to the future.  Not only do they know that a college graduate will make more, on average, than someone with a high school degree, but they’re also aware that college students have a whole lifetime of earning, saving, spending and thus, banking ahead of them.  In other words, issuers more than anything else want to groom lifetime customers from the college crowd.

That’s not to say that creditors never have or never will take advantage of young people.  That would be untrue.  But the credit card landscape is a lot safer for college students these days.  In addition to enjoying the same CARD Act protections as the general population, students benefit from the fact that the law also bans credit card companies from advertising on college campuses, particularly when it comes to the once-common practice of offering giveaways in return for applications.

Marketers have taken their pitches to the Internet, using social media to interact with and attract young consumers, but at least college students are no longer being put into the position of having to make important financial decisions while on their way to a big football game anymore.

The best way for a young person to use a credit card is as a credit-building tool.  Credit cards report information to the major credit bureaus on a monthly basis.  As long as you keep credit utilization levels low and always pay your bill on time, this information will be positive and therefore beneficial to your credit standing.  You don’t even have to make any purchases to benefit, as information will be reported to the bureaus each month no matter what.  And since many student credit cards do not charge a monthly fee, students don’t have to invest any money into grooming their credit scores for the real world.

You can read more about choosing and maximizing the benefit of a student credit card in our New to Credit Guide.

Consumers have long been able to list household income along with personal debt on credit card applications.  The CARD Act initially outlawed the practice, however, requiring applicants to list both income and debt on the personal level.  The rationale was that the new system would better enable credit card company underwriters to determine if an applicant has enough money to afford a new credit line.  That, in turn, would reduce default rates and lead to more attractive terms for qualified borrowers.

But the CARD Act’s so-called “ability to pay” requirement actually sparked a great deal of unrest among consumers following the law’s enactment.  The switch from household to personal income would unfairly prevent stay-at-home parents from taking out and building credit in their own names, critics said, potentially leading to serious problems in abusive relationships.

As a result, the Consumer Financial Protection Bureau essentially reverted back to the old “household income” system, despite its inability to accurately indicate risk.  Now, credit card applicants are free to list any household income to which they have a reasonable expectation of access, along with any debts and liabilities they personally owe.

The CARD Act implemented a number of different rules regarding the fees and interest rates that credit card companies are allowed to charge and the procedures they must follow regarding changes to an account fee or interest rate structure.  They include:

In an effort to make credit card use simpler and more transparent, the CARD Act implemented a number of rules dictating how the credit card billing process should work and the manner in which payments are applied to one’s account.  These rule changes include:

While the Consumer Financial Protection Bureau – the personal finance industry’s new central regulatory body – was created by the Dodd-Frank Wall Street Reform and Consumer Protection Act, and not the CARD Act, the CFPB took control over the enforcement the CARD Act in 2011.  The agency has since proven quite effective in monitoring and correcting problems in the personal finance space.

The CFPB’s initial focus was primarily on credit cards, but it has since moved on to address credit reporting errors, debt collection, discriminatory auto lending practices, and more.  The agency has also established a complaints database that enables consumers to air and address grievances and also provides interesting insights into the most pressing matters in the personal finance space.

Credit cards weren’t the only cards that got a face lift as a result of the CARD Act – gift cards did too.  More specifically, the CARD Act:

While the Federal Reserve effectively closed a number of the CARD Act’s most serious initial loopholes, a couple of major ones still remain.

While the CARD Act was initially met with mixed reviews, the more research that is conducted into the law’s impact, the more effective it seems to be.  Not only did WalletHub and the Center for Responsible Lending determine early on that the rise in interest rates witnessed in the aftermath of the law’s passage was a side-effect of economic circumstances, and not the fault of the CARD Act, but the CFPB also concluded that the CARD Act has lowered fees and interest rates without causing a reduction in the availability of credit.

When you consider all of the CARD Act’s many provisions, it’s clear that consumers now have a completely new set of rights protecting them from predatory or simply unfair credit card company practices.  Having a firm grasp on these rights is the best way to avoid falling victim to unscrupulous financial institutions.  It’s therefore a good idea to take a look at WalletHub’s Credit Card Bill of Rights and to keep it handy for easy reference as you manage your finances moving forward.

what part of the card act refers to deferred interest promotions