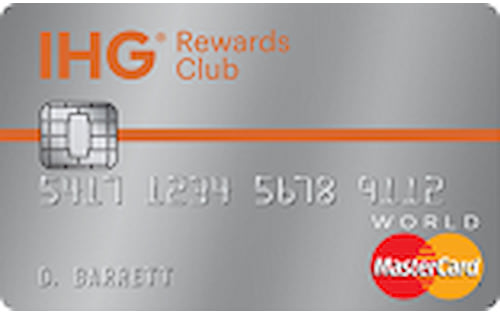 Note: This card is no longer open to new applications. Information listed here may no longer be accurate.

The Verdict:  The IHG® Rewards Club Select Credit Card is perhaps the best hotel rewards card on the market, offering attractive benefits capable of satiating the appetites of IHG loyalists and people testing the hotel-affinity waters, at a price point neither group can quarrel with.

In addition to earning 5 points per $1 spent at IHG hotels, 2 points per $1 at gas stations, department stores and restaurants, and 1 point per $1 everywhere else, cardholders receive complimentary Rewards Club Platinum Elite status and one free night each year. Spending at least $1,000 in the first three months your account is open also triggers a bona fide rewards windfall: 60,000 bonus points, redeemable for up to six free nights.  All of that is yours for a $49 annual fee that’s waived for the first year.

All things considered, the IHG Card is a tough deal to pass up, yielding roughly $1,300 in net rewards value over the first two years, based on the average person’s spending profile. That equates to about 11 free nights, on average, depending on when and where you stay.